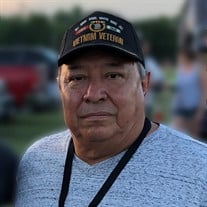 Funeral services for Walter A. “Rocky” Pigeon will be held Tuesday, October 26, 2021 at 2:00 PM at the Hickory Ground #1 Church south of Henryetta. Interment will follow at the Pigeon Family Cemetery. Walter Alan “Rocky” Pigeon was born January 27, 1952 in Claremore, Oklahoma to John and Gertie (McNac) Pigeon. He passed away Friday, October 22, 2021 at his home south of Okemah at the age of 69 surrounded by his loved ones. Rocky was a resident of Okemah and served as the Chairman of the Creek Nation Election Board. He also proudly served his country with the United States Marine Corps. Rocky enjoyed doing anything outdoors, he loved to fish, build gardens and he enjoyed drinking his coffee every morning outside with his family pets Oscar and Maddie Pigeon. He loved to be involved with the area youth sporting events, play basketball with his son, Noah, and was a fan of the Oklahoma State Cowboys. In his younger days, Rocky was a Golden Glove Champion Boxer that loved boxing and sometimes would box around with his nephews. Rocky loved to have family gatherings and grill his delicious ribs and brisket, play dominoes and traditional stickball. Rocky belonged to Hickory Ground #1 Indian Baptist Church and New Tulsa Ceremonial Ground. Rocky and Shirley spent 38 years together and were married on December 6, 2003 in Tulsa, Oklahoma. Together they raised two children, Annissa and Noah. They loved traveling to many places, bowling and playing pool together. He is preceded in death by his parents; four brothers, Jimmy Lee Billie, Jimmy Lee Pigeon, John Pigeon Jr. and Billy Ray Pigeon; one sister, Geneva Taylor; one son, Radamas Pigeon and one daughter, Melissa Mitchell. Survivors include his wife, Shirley and son Noah Pigeon both of the home; four daughters, Rakell Hanson of Tahlequah, Stephanie Byrd of Tulsa, Melissa Sanders of Okmulgee and Annissa Pigeon of the home; one sister, Priscilla (JoBuck) Tecumseh of Okemah and numerous grandchildren and great-grandchildren. He is also survived by a host of nieces, nephews and cousins that he loved and cared for dearly. Rocky will be missed tremendously by all who loved him. Pallbearers include: Marcus Pigeon, Leslie Taylor, Johnathan Harjo, Lewis Tulsa, Damien Pigeon, Raymond Fogel, Nickolas Pigeon and Sergio Bernal. Honorary bearers will be Noah Mitchell, Bill Proctor, Ralph Gray, Newman Taylor, Adam Pigeon, Angel Bernal and Brenton Pigeon. Services will be under the direction of Parks Brothers Funeral Home, Okemah, Oklahoma. Online condolences may be made at www.ParksBrothersFuneralHome.com.

The family of Walter A. "Rocky" Pigeon created this Life Tributes page to make it easy to share your memories.

Funeral services for Walter A. “Rocky” Pigeon will be held Tuesday,...

Send flowers to the Pigeon family.