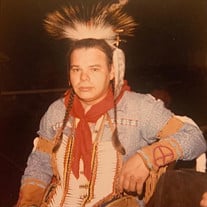 Funeral services for Willard Dean Welch will be held Tuesday, August 31, 2021 at 2:00 PM at the Parks Brothers Funeral Home Chapel in Wetumka, Oklahoma. Interment will follow at the Weleetka Cemetery. Willard Dean Welch was born November 28, 1949 in Weleetka, Oklahoma to Wilford Donald Welch and Mary Lee Scott. He passed away Friday, August 27, 2021 at his home in Inola, Oklahoma at the age of 71. Mr. Welch was a resident of Inola, Oklahoma. He worked many years as a machinist and was a proud citizen of the Muscogee Creek Nation and member of the Alabama Quarsarty Tribal Town. He enjoyed singing with Redland Singers, fishing, attending sports events and beading. He loved spending time with his family, especially his grandkids, and was an avid OU fan. On March 10, 1986, in Reno, Nevada, he married Lorrie Law. Mr. Welch will be dearly missed by his family and friends who loved him dearly Survivors include his wife, Lorrie of the home; three daughters, Alma of Tulsa, Helen and husband Wesley of Inola and Bobbi also of Inola; one son, Ronnie of Texas; two brothers, Eddie and Tommy; seven sisters, Donna, Dodie, Denise, Sue, Debbie, Paula and Rose and six grandchildren, Audree, Emelin, Merkv, Denton, Jonah and Baby Dean and also many cousins, nieces and nephews. He is preceded in death by his parents; two brothers, Kenneth and Randy and one sister, Tracy. The members of the Redland Singers will be serving as pallbearers. Honorary bearers include Rod Mohler, George Coser, Pete Coser, Wayne Coser, Ira “Poncho” Fields, John Sellers, Jackie Anquoe, Butch McIntosh and Dallas Fortney. Services will be under the direction of Parks Brothers Funeral Home, Wetumka, Oklahoma and officiated by Anthony KillsCrow. Online condolences may be made at www.ParksBrothersFuneralHome.com

The family of Willard Dean Welch created this Life Tributes page to make it easy to share your memories.

Funeral services for Willard Dean Welch will be held Tuesday,...

Send flowers to the Welch family.